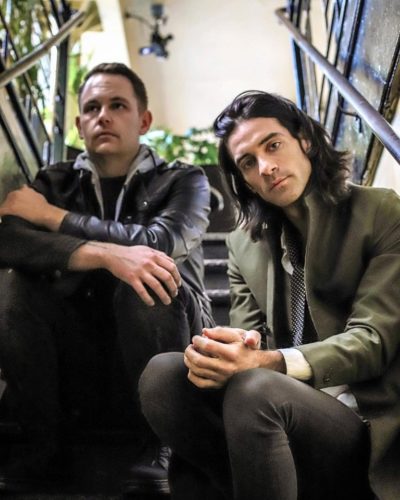 We are very proud to present New York band Silver Relics on a whirlwind string of dates including Dublin, London, Limerick, Manchester and Brighton!

Formed in 2017 in New York, Silver Relics are a rock outfit comprised of singer/guitarist Alex Sepassi and drummer Justin Alvis. The band’s influences stem from a range of genres with post-punk, shoegazing, grunge, acid rock and Madchester all encompassed in the band’s realm.

Showing promising talent from a young age, Sepassi grew up listening to the sounds of U.K. songsmiths of the 60’s and 70’s, an influence which features heavily in his own approach to songwriting.

In 2016, Sepassi was introduced to renowned music producer Howie Beno at his South by Southwest showcase in Austin, Texas; both immediately connecting over interest in the others past endeavours, work on recording Sepassi’s music subsequentaly began, with Sepassi affirming to RJ Frometa of Vents Magazine; “Howie’s the director, mentor, facilitator, the boss and our dear friend. He’s just as much a member of this group as we are, and we know just how fortunate we are to say it.”

Beno, who has worked with Blondie, Red Hot Chili Peppers, Depeche Mode & Grace Jones among others, was also the keyboardist in synth-pop turned industrial metallers Ministry, who were commercially successful in the late 1980’s and early 1990’s, with Beno co-writing their 1992 album “Psalm 69” which included the standout track “Jesus Built My Hotrod”.

Silver Relics released their debut album “Generic” on 17th May 2019, which was recorded in just 31 days, over the course of 5 months, within 3 recording sessions, with Sepassi writng all the tracks for the album within that time frame; he told Vents Magazine that it gave the work a “certain level of urgency, intensity and focus. I think you can really hear it in Justin’s drumming and in my voice”. Working with Howie proved to be very successful with Sepassi full of praise for the producer and composer “Beno was instrumental in capturing all of the ideas that kept coming, which really ties this whole record together.”

“Sepassi is a skilled songwriter and with Alvis at his side, they lay open the heart of the American dream and show us glimpses of what beats beneath.”

“Drawing influence from the iconic British songwriters of the 1960s and 1970s and brooding ’80s rock, Silver Relics deliver a psychedelic sound that simultaneously smolders and electrifies with fierce energy, conjuring vibrant technicolor dreams and scenes of thrilling adventure.”